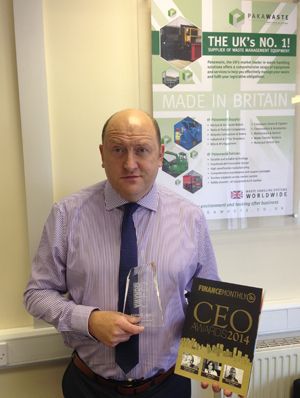 David Hamer, Chief Executive Officer of Pakawaste Ltd, market leader in the field of waste handling equipment, has been announced as the winner of this year’s Finance Monthly CEO Awards.

The award is open to CEOs from around the globe with eligibility determined by Finance Monthly, based on the CEO’s achievements. Achievements can include growth in revenues and/or profits, successful turnaround, doing well in difficult economic or industry times, expansion into new markets, leading market share, successful merger and acquisition, new products/services, new business model, and business strategy.

The final part of the process allows Finance Monthly readers to vote and give reasons for their vote, providing valuable insights into what key factors drive the success of the nominees. The input is then statistically analysed taking into consideration the listed achievements and the number of votes. Between January and March 2014 a total number of 10,683 votes were registered, with David becoming the well-deserved winner.

David joined Pakawaste in June 2006 as the Sales & Marketing Director and has been instrumental in Pakawaste’s growth; taking the helm in November 2007 as the Managing Director. David ensured Pakawaste maintained its position as UK market leader, and was responsible for developing other key markets, raising Pakawaste’s profile across many market sectors and the subsequent revenue growth. 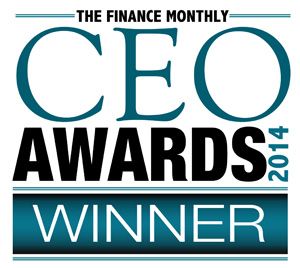 Following the retirement of Pakawaste founder and group chairman, John Hunt, in July 2013, David acquired the business along with American investors and was appointed as the Chief Executive Officer. David has kept the group focused on its key objectives, growth and developing the core business, whilst expanding the rental and service offering and maintaining manufacturing in Preston UK. The Group also continues to grow its overseas market and has recently opened new agents in India and the Middle East.

David commented, “I’m very proud to receive this award which couldn’t have been achieved without the dedication of the whole Pakawaste team. We still have many great challenges ahead and aim to continue to build on recent improvements in operational performance and to improve the business’ return on capital. A big thank you to Finance Monthly and all the readers who took the time to vote for me.”

We use cookies on our website to give you the most relevant experience by remembering your preferences and repeat visits. By clicking “Accept All”, you consent to the use of ALL the cookies. However, you may visit "Cookie Settings" to provide a controlled consent.
Cookie SettingsAccept All
Manage consent

This website uses cookies to improve your experience while you navigate through the website. Out of these, the cookies that are categorized as necessary are stored on your browser as they are essential for the working of basic functionalities of the website. We also use third-party cookies that help us analyze and understand how you use this website. These cookies will be stored in your browser only with your consent. You also have the option to opt-out of these cookies. But opting out of some of these cookies may affect your browsing experience.
Necessary Always Enabled
Necessary cookies are absolutely essential for the website to function properly. These cookies ensure basic functionalities and security features of the website, anonymously.
Functional
Functional cookies help to perform certain functionalities like sharing the content of the website on social media platforms, collect feedbacks, and other third-party features.
Performance
Performance cookies are used to understand and analyze the key performance indexes of the website which helps in delivering a better user experience for the visitors.
Analytics
Analytical cookies are used to understand how visitors interact with the website. These cookies help provide information on metrics the number of visitors, bounce rate, traffic source, etc.
Advertisement
Advertisement cookies are used to provide visitors with relevant ads and marketing campaigns. These cookies track visitors across websites and collect information to provide customized ads.
Others
Other uncategorized cookies are those that are being analyzed and have not been classified into a category as yet.
SAVE & ACCEPT
MENU